I love cornbread.  Nobody else in my family did.  If I made a pan of cornbread, I ended up eating most of it.  Then, I started making this.

Preheat the oven to 400 degrees.

Combine the dry ingredients (cornmeal, flour, baking powder, baking soda, salt, and cayenne)  in a medium bowl.  In a large bowl, combine the honey, melted butter, egg, and buttermilk.  Stir in the jalapeno, corn, and cheddar.

Pour the dry ingredients into the egg mixture and stir until just combined.

Pour the mixture into the skillet. Bake for 20 - 25 minutes until a toothpick comes out clean. 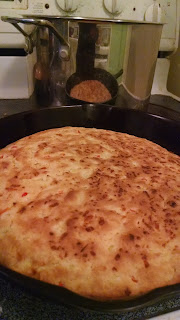 Peel (if you would like) and slice the eggplant. I am normally not a huge fan of peeling vegetables, but if your eggplant has tough skin, I would recommend it. Sprinkle the eggplant on both sides with a little salt, and let rest for 20 minutes or so. Then pat dry.

In the mean time, beat the eggs and milk in a flat-bottomed dish with a larger diameter than your eggplant.

Mix the Parmesan cheese, breadcrumbs, and herbs in another flat-bottomed dish, or a plate with a rim.

Spread a little spaghetti sauce in the bottom of your casserole dish. Put a layer of eggplant in the dish, then cover with some sauce.  Add another layer of eggplant and more sauce until you have run out of eggplant. Arrange the sliced mozzarella over the eggplant. Bake for 20 minutes. 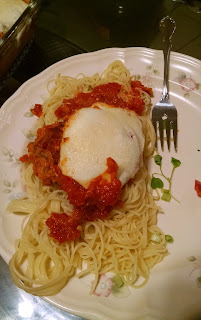