My mother's grandfather immigrated to the United States from Sweden.  When I was in junior high school, my mother decided to connect with her Swedish roots, and one of the ways she chose to do this was through food.  One of her favorite recipes was Pickled Cucumbers, or Inglada Gukor, as it says in the Swedish cookbooks. 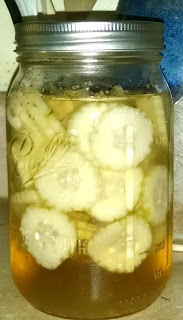 Usually, we just had pickled cucumbers as a refreshing summer side dish. But they are also fun on a sandwich. Here is my new favorite lunch. This is toasted french bread, topped with hummus and sliced tomatoes, sprinkled with sea salt and freshly ground pepper. Add sliced pickled cucumbers, and garnish with microgreens. 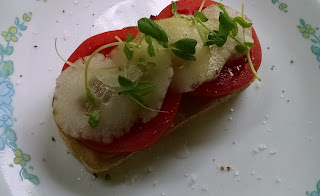